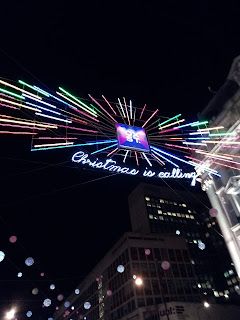 Well yes, Chrismas is calling, Diwali is now passed and the evenings are drawing ever so early in the day, parties abound and it is the time to be jolly. Think about others who cannot and think about those who you have not spoken for a while, they may enjoy getting in touch again...

I get people to reconnect sometimes even after a break of five years and we take it from there as it was yesterday. Life is like that sometimes.

This year started with some good news, two of my nieces announced they were pregnant and some bad news, some friends died, other friends celebrated in style their significant birthdays through the year.

Travelling to and fro Belgium, Wales and London with the little escapes to ski in Les Gets and the sea in Thassos, GPN and The Whitefriars Club continue to thrive and I am delighted to have welcomed many people and speakers to both of them.

Lady Colin Campbell attended the first GPN of the year and Jerry Hayes the first Whitefriars Dinner both at the Savile Club. I visited the Supreme Court and attended the Civic Luncheon in the Crypt of the Guildhall and dined in the Judge's Chambers at the Old Bayley with the Sherif of London with the Bishopsgate Ward Club.

Other speakers at the Whitefriars Club were The Rt Rev and Rt Hon the Lord Chartres KCVO ChStJ PC FSA at the Palace of Westminster in February to celebrate its 150th anniversary, Geoffrey Mub, Dele Ogun, Jeff Anderson, Lord Lisvane and A.N. Wilson.

GPN celebrated diversity and inclusion at the House of Lords in July with The Lord Scriven of Hunters Bar who subsequently became our Patron. Other speakers were Abel Rubinstein, the director, Dan de la Motte who took us around Soho, Gary Henshaw, Robert S J Lucas when we went to see his musical at "The Other Palace" and Niall Cunniffe.

I attended a fundraising dinner at the The Belgian Ambassador Residence for the Torch Kindling Ceremony who just happened this November, celebrating the 100th Anniversary of the end of the first World War, so called the Great War but really there is nothing great about a war, it is just awful to see what humanity can let itself so down, let's never forget!

Filming wise, I was fortunate to work with Renee Zelwegger who I think will land an oscar for her rendition of this film, it is sadly to early to let you know what I have been up to with the other films as they are not out yet but look at your screens big and small for some adverts and wonderful films that I was delighted to be in. This year you probably seen me already in Vanity Fair, Ready Player One, The Crown, Film Stars don't die in Liverpool, The Children Act, Darkest Hour, Johnny English and Fantastic Beasts. I also did my first narration for a French Film in May

Lunches and dinner were spent in the usual haunts of the Savile, Turf, Civil Service, Boodle and National Liberal Club were we seen this year's start on the terrace and there were parties also at The Inner Temple and the Chelsea Arts Club.

Two of my nieces celebrate their 40th birthday, one in January, yet the party was in May, and the other in December, guess the party is next year.

I worn for the first time a kilt for the wedding celebration at the House of Lords of Roland and David and will again for Burns Night next year.

There is probably too much to remember and forgive me if I do, there are much more that I attended, some that I cannot talk about but it has been a very enjoyable year surrounded by the love and friendship of family and friends.

I very much look forward to seeing you again soon and wish you and yours all the very best for Hanukkah, Saturnalia, Christmas and the New Years.

Love, Peace and Light to you all.

JFDE
My experience in international hospitality, event management, public relations, charity and marketing with varied established contacts across these sectors worldwide allows my clients to benefit from professional expertise and be a step ahead of their competition. Individuals or businesses: whatever your needs or budget, I contribute to your success.